At the recent vRetreat at Silverstone, I experienced three technical presentations / Q&A sessions from the event sponsors. One of these, Cohesity, I was charged with writing a little more about. Up until that point, my experience and knowledge of Cohesity's solutions was very limited as I've had my head buried in several large projects over the recent months. Ezat Dayeh‘s presentation at the vRetreat was therefore a great introduction for me to Cohesity's mission and value proposition.

Cohesity was founded in 2013 by Mohit Aron, former co-founder of Nutanix and a Google File System lead developer. With this DNA, it's no real surprise that Cohesity's solutions have a storage focus. The difference with Cohesity is that its focus is not around primary storage (production virtual machines, databases etc), but secondary storage (file shares, backups, archives etc). Their mission is to redefine that secondary storage market. 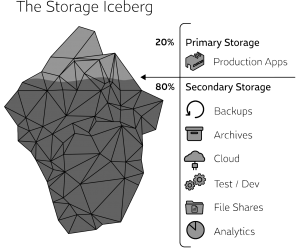 What is secondary storage

Cohesity estimate that around 80% of an enterprise's storage needs are for secondary data and that the majority of the storage market incumbents are focussed on primary storage. Obviously the picture will differ from customer to customer, but in many cases this secondary storage will be distributed across various platforms and, in some cases, may be stored more than once. This could lead to problems with regulatory compliance, operational costs and even just having a view on what data is being retained.

Cohesity's solution is based on a hyper-converged infrastructure platform built from commodity hardware. Of course the hardware isn't the whole story, not even close to it. But we'll come on to the software part of it in a minute. 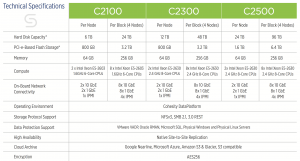 The C2000 series chassis offers 4 HA nodes in 2U of rack space and there are no stated limits when it comes to scalability. The obvious advantage to this over some of the more “traditional” storage solutions is of course that you can start small and grow it. This is a model that many newer solutions are opting for and it seems to work well for them, so why not Cohesity too 🙂

Cohesity's special sauce, its software, is where the clever stuff happens. One of of the primary use cases for Cohesity is as a backup target or to provide an alternate backup solution. Cohesity can be a backup target for your existing backup software (Veeam being one of the cited examples and another of vRetreat's sponsors). Alternatively, Cohesity can pull in the inventory from vCenter so that it can be backed up as part of a schedule using snapshots. Protected virtual machines can be restored swiftly and even used for test and development workloads. Restoration jobs are placed and on the Cohesity platform initially and then storage vMotioned back to the correct location later.

Cohesity's CloudArchive solution opens up the option of archiving cold data up to public cloud services like Amazon S3 or NFS based services. Once enabled, it's all automated.

CloudReplicate is a version of Cohesity that runs in the public cloud and enables a number of interesting use cases. One is DR in the cloud, Azure is supported with AWS coming soon. Another is using such cloud services for test and development environments, particularly for geographically dispersed teams.

Another area that Cohesity are actively working on is that of data analytics. They predict that in 3 to 4 years' time, it'll be a huge use case. Add in deduplication, an “API first” development approach and built-in HA to the mix and you have an interesting solution emerging. 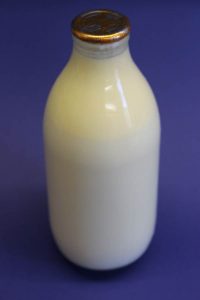 My thoughts on Cohesity? Based on Ezat's presentation, Cohesity looks to have found an area that isn't fully exploited yet. Most other vendors so far have been focussed on the cream at the top of the bottle (I had a manager once who raved about gold top milk) and, in some cases, happy to drink the rest too. Cohesity almost seem to be saying “You have the cream, we'll have the rest of the bottle.” Will they be successful? I think they will. Ezat shared with us that their EMEA sales operation was doing well in the first four months of operating. But I'd wager that their successes will draw other players in to the space they're trying to carve out.

I'd like to hear from some of Cohesity's customers at some point to understand how it's helped them. There's nothing better than a good customer use case! Of course, some potential customers are going to be wedded to other vendors and some may be doing just fine managing their data with their primary storage. But it's a big marketplace out there if the USP is right.

As a final word, I'd like to thank Cohesity for sponsoring the vRetreat last month. And, if you happen to be around for the South West UK VMUG in Bristol on February 22nd, they'll be there then too.