I've been a user of VMware's products since finding VMware Workstation in the early noughties but things really took off for me in 2007 with ESX3. I've long thought that I might work for VMware one day if the circumstances were right. As of yesterday, it became a reality.

This has been mostly a sideways move for me as I have joined the Northern EMEA PSO team as an SDDC consultant. I'll probably be working on similar projects to the ones I have been working on already. However, I believe that the opportunities within VMware for me at this stage of my career are significant. I'm excited by the prospects and keen to get stuck in.

One downside to this move is that I have had to step down as a co-leader of the South West UK VMUG chapter. It's been a fantastic 2 years and we've organised some great meetings but the remaining leaders (Barry Coombs, Simon Eady and Jeremy Bowman) are more than equal to the task. (Although they almost stole my thunder!) 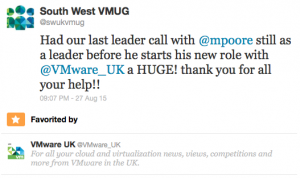 On the subject of VMUGs, a quick shout out for the next South West UK VMUG meeting on September 28th 2015. Register here. And although I can no longer have any sort of leadership role in VMUG meetings, I hope to still be presenting at them regularly.