A long time ago, on a project far back in time, the team that I was part of was given a requirement to zero the disks of VMs before they were deleted by vRA / vRO (or vCAC and vCO as they were called back then). One of my colleagues on the project, Jonathan Medd, devised an approach for doing this using an “experimental” PowerCLI feature and wrote it up on his blog.

Fast forward nearly two and a half years and I'm looking at an upgrade for this platform and wondering if there's a way to accomplish the same task in vRO rather than by breaking out to PowerCLI. Don't get me wrong, I love PowerCLI. But fewer parts would mean that there's less to go wrong. How to do it then…

This is still listed as an experimental feature in the PowerCLI documentation for vSphere 6.5. The Set-HardDisk cmdlet has the -ZeroOut option and it would still be used exactly as Jonathan describes it in his article.

I'm not sure when it was added (i.e. which version), but back in 2014 we couldn't find equivalent functionality in vRO. I did a quick search of the vCenter plugin methods in my v7.2 appliance and couldn't see it there either. It turns out though that I was having a bad typing day. Burke Azbill pointed me to the right place (thank you): 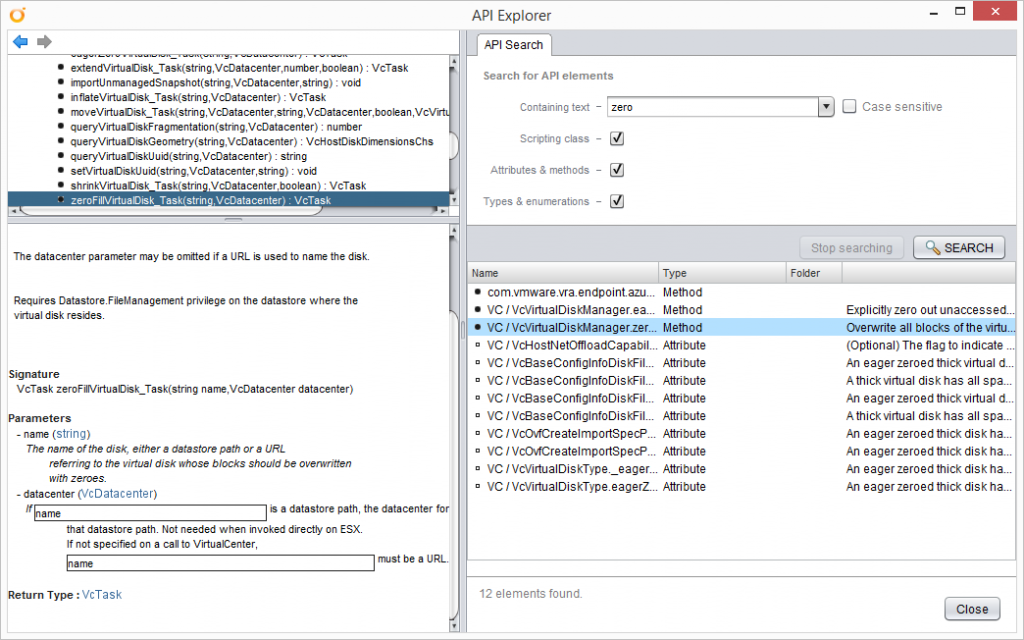 So, “zeroFillVirtualDisk_Task” is a method called from VcVirtualDiskManager. All we need to give it is a datastore path and a VcDataCenter object and it'll do the rest.

Getting a datastore path is relatively straight forward. Using vSphere's Managed Object Browser (MOB), I can pick a VM object and navigate down to the config (1) and the hardware (2), get the disk devices (3) and look at their backing (4). The fileName attribute gives me the datastore path that I need. 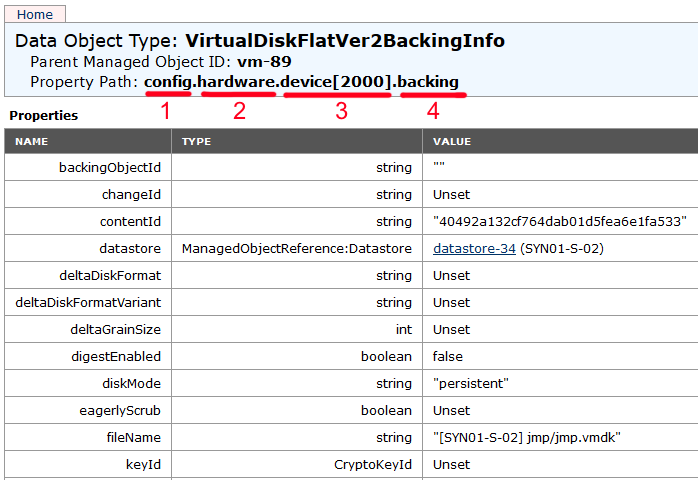 Obtaining a VcDataCenter object, if I have the VM object already is a doddle too. There's a vCenter plugin action that will do it for me based on the information that I have available to me in the MOB above. Taking the datastore attribute, which is a reference to a datastore object, I can pass it to the action below and get the VcDataCenter back.

Starting with a vCenter VM (vm in the script below) object in vRO then, zeroing all of the VM's disks can be achieved as follows:

There are a few considerations aside from some minor tweaks to make the code more efficient or robust before we look at adding this as a workflow subscription in vRA.

Adding it to the vRA Event Broker

Taking the original script above and factoring in the considerations too, it's possible to create a fairly simple workflow that can be added as an Event Broker subscription in vRA. I'll post it up here soon.